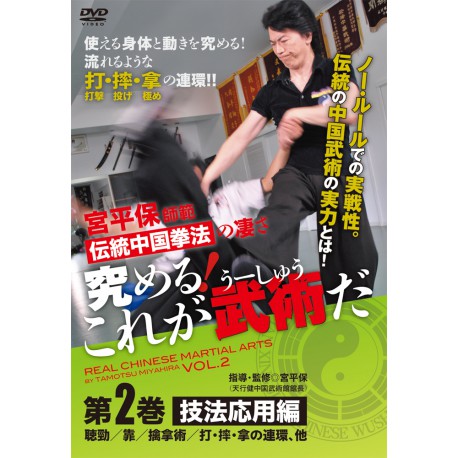 The first foreigner instructor certified by the Chinese Federation of martial arts, Tamotsu Miyahira, teaches and explains in details the combat philosophy and techniques.

The reality of Chinese martial arts way of fighting does not lie in a particular school or style. It consists in spontaneously adapt to the opponent's movements and in a succession of continuous attacks - strikes, projections, ..., to finally let the body carry out the attack and defense by itself without going through the thought process.

In the second volume, intended to Advanced level practicioners, you will learn to listen to the opponent's energy, walking method, joint lock techniques,technique of chain, and you will learn how to apply the techniques that you have learned in the first volume.

● Both hands (step 1: separate the offence and the defence, step 2: free to offense and defense)

2) Step method (crossover) - match up of the position and the body
● Techniques with the basic walking (joint lock from Joint lock kick, knee to the pick of the technique, elbows techniques )

● Parry techniques with the basic walking (against opponent with a weapon, against a kick using the centrifugal force, against straight kick)

4) How to put out of force - for the "valiant"
(Energy ... to burst out the energy like a rebounded spring, to emit a force as trembling from the central body line )

5) Joint lock techniques
● Captivated technique (Arms from inner side, arms from out, with elbow,  with palm and the chain attack of joint lock)